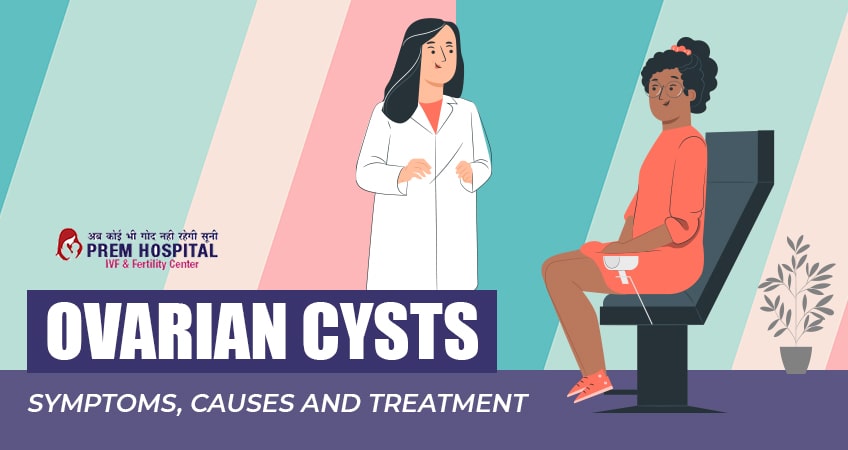 The female reproductive system comprises ovaries that are present on both sides of the uterus in the lower abdomen. In women, eggs are produced by two ovaries, and also the body contains hormones, namely progesterone, and estrogen. Sometimes, a cyst is developed in any one of the ovaries, a kind of sac filled with fluid. Many women get at least one cyst in the ovary in their life. Usually, the cyst is harmless and reflects no symptoms. However, if the ovarian cyst gets ruptured, the body gives severe symptoms to the patient.

Usually, the ovaries cyst doesn’t give any symptoms and disappears by itself. However, a large ovarian cyst can give the below symptoms:

Each month cyst-like structure is developed in a woman’s body called follicles. These follicles generate hormones progesterone and estrogen during ovulation, which release an egg.

The egg is released out of the follicle during the menstrual cycle and reaches the fallopian tube. A follicular cyst develops when the follicle does not release the egg; instead, it grows.

After the follicle releases the egg, it produces progesterone and estrogen for conception. This follicle is now termed as corpus luteum. Sometimes, fluid collects in this follicle which causes the corpus luteum to grow and convert into a cyst.

Functional cyst never creates any problem to the body, and they disappear after one or two days of the menstrual cycle.

Another type of cysts that are not related to your menstrual cycle includes:

These cysts may contain hair, teeth, or skin as they are formed through embryonic cells.

Cysts may develop on the ovaries and contain water or a mucous material.

In this condition, uterine endometrial cells grow outside the uterus. Some tissues may stick to the ovary and start growing there to form a cyst.

Dermoid and cystadenomas cysts may grow large and cause the ovary to move out of its location. Such cysts can cause twisting of the ovary, which is extremely painful. Such a condition is called ovarian torsion.

Most of the ovaries never cause any harm to the body and go without treatment. But in rare conditions, doctors may detect cancerous cystic ovarian mass during the inspection.

In ovarian torsion, blood supply is cut off from the ovaries and if not treated timely, severe damage or even death of the ovarian tissues may occur. Although such a condition is infrequent, ovarian torsion is detected in 3% of emergency gynecologic surgeries.

A ruptured cyst, a rare condition, can result in severe pain and bleeding. Such a condition increases the risk of infection and can be life-threatening if left untreated.

The risk of cyst development increases because of the below reasons:

These are caused by the fertility drug clomiphene taken for ovulation.

Sometimes in pregnancy, the cyst formed during ovulation remains on the ovary for the entire pregnancy period.

Cysts may form if the pelvic infection spreads in the ovaries.

Your doctor may either reduce the size of the cyst or remove it entirely if it doesn’t go away by itself or starts becoming larger.

In case of recurring ovarian cysts, a doctor may advise you to take oral contraceptive pills for stopping ovulation and prevent the development of the new cyst. Such contraceptives will also minimize the possibility of cancer in the ovaries.

If the cyst size is small and from imaging tests, doctors came to know about the possibility of cancer in the cyst, they will perform a laparoscopy for infertility to remove it surgically. In this procedure, a small instrument is inserted into the body by making a small incision near the patient’s navel.

In a large cyst, doctors can remove it through a large incision in the abdomen. In such cases, a biopsy is done immediately. If the doctors determine the chance of cancer in the cyst, they may perform a hysterectomy to remove both ovaries and the uterus.

Although there is no prevention measure that one can take to prevent the growth of a cyst in the ovaries, a regular pelvic examination can diagnose the symptoms as early as possible. Keep a check on your regular menstrual cycle and consult your doctor about any unusual menstrual symptoms. Consult your doctor about changes in your body which is concerning you. As cyst can become a reason for female infertility in many women.