Often in cases of infertility or abnormalities in a woman’s reproductive system, a doctor recommends she to have a hysteroscopy test done. It is required to check the functionalities and condition of the female reproductive parts via insertion of a hysteroscope through their vagina which shows them clear images of the cervix and the uterus. 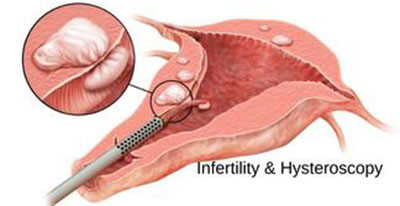 Many a time when a woman suffers from severe menstrual cramps or heavy flow during menstruation, doing a hysteroscopy test is also recommended to understand the condition of the woman better. It is done to be confirmed of a female’s fertility condition and everything else related to her reproductive health.

A hysteroscopy surgery is a kind of invasive procedure performed on females to acquire knowledge of their reproductive parts and gain knowledge of the health conditions at the same time.

It does not take much time to complete the procedure and the discomfort or pain of the patient is also not too much. A narrow tube-like structure which is called the hysteroscope is inserted into the vagina of the woman; this has a small telescope attached to the end to get clear images of the parts inside.

It’s an easy procedure and does not cause many side effects also. It is performed under the influence of anesthesia and thus you may feel a little dizziness after you come out of the effects of the anesthesia. As far as the cost of the procedure is concerned, it is not too much to bear for an average person.

In most female infertility treatment cases, the problem lies with the woman’s cervix and uterus rather than anything else. Thus, knowing the condition and healthiness of these reproductive parts is necessary for every health expert treating her for infertility issues to be sure of the exact cause behind her infertility.

Sometimes, women can face heavy bleeding without being on menstruation, they can have infections in their cervical paths, and they can have polyps or fibroids in their uterus, face miscarriage, and other such issues with their reproductive system which needs immediate intervention from the doctors.